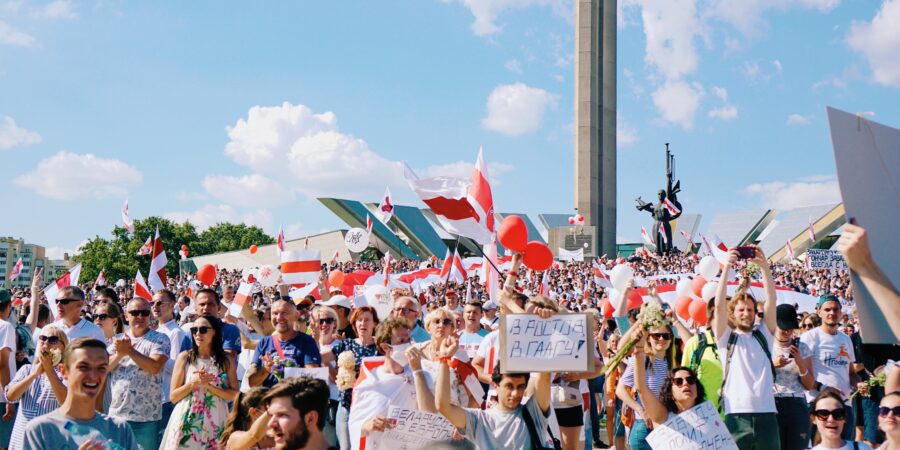 Belarus: On the Road joins the civil society organizations call

On the Road joins international organizations’ call for the United Nations Human Rights Council to convene a Special Session to address human rights violations committed in the lead-up, during, and after the August 2020 Presidential elections in Belarus, as a member of La Strada International, who signed the appeal.

In Belarus, since May 2020 and following the announcement of the preliminary results of the 9 August 2020 elections, which gave the incumbent President Aleksandr Lukashenko over 80 % of the votes, the human rights violations by the Belarusian authorities against the tens of thousands of people who took to the streets to protest the alleged electoral fraud, are not ceasing.

This period in Belarus has been marked by an unprecedented level of peaceful protest activity, and an equally unprecedented brutal crackdown on human rights by the authorities. Already before 9 August, since May 2020, the Belarusian authorities have arbitrarily detained over 1,300 individuals, including presidential candidates human rights defenders and activists, and journalists, for exercising their fundamental freedom. Immediately after the announcement of the preliminary results, the protests intensified and riot police responded with disproportionate use of force causing injuries to hundreds of people and multiple confirmed deaths. Within a span of three nights of protests after following the elections, the Belarusian authorities have additionally detained up to 7,000 people (including at least 50 journalists), most of whom simply participated in or attended peaceful protests.

To date, according to the Viasna Human Rights Center, at least 450 detainees have reported being tortured or otherwise ill-treated while held in incommunicado detention for up to 10days, including through severe beatings, being forced to perform humiliating acts, and through threats of rape and other forms of violence.

The ongoing events in Belarus demonstrate the authorities’ determination to suppress all forms of dissent and free expression of the people of Belarus, including through mass violence, disproportionate attacks against demonstrators, mass arbitrary arrests, judicial proceedings, and ill-treatment of peaceful demonstrators.

All this is unacceptable and the time has come for a strong international response.

Considering the gravity of the violations, the alarming degradation in the situation, and the importance of acting swiftly to prevent further serious violations, the undersigned Belarusian and international organizations have requested the Human Rights Council to convene an urgent Special Session on the human rights situation in Belarus, to use the tools at its disposal to uncover the facts and circumstances surrounding human rights violations and abuses, and deter the Belarus government’s further crackdown on human rights and ensure accountability, in line with its obligations under the UN human rights treaties to which it is a party.